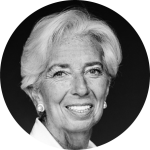 Christine Lagarde is the first female President of the European Central Bank.
She is the Chair of the European Systemic Risk Board and a member of the G7 and G20. Previously, she was the Managing Director of the International Monetary Fund (2011-2019) and served in Ministerial positions in France including Minister of Economy and Finance (2007-2011), Minister of Agriculture and Fisheries (2007) and Minister of Trade (2005-2007). During her extensive career as an anti-trust and labour lawyer, from 1999 to 2005 she held the position of Global Chairman of International law firm Baker McKenzie. She holds Masters in Commercial Law from Paris X University’s Law School, in Economics and Finance from Sciences Po Aix-en-Provence, and in American Literature from Avignon Art College.