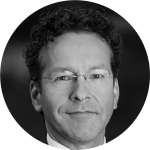 Jeroen Dijsselbloem, Chair of the Dutch Safety Board
Jeroen Dijsselbloem is currently Chair of the Dutch Safety Board and of the EU High-level group on Financing the Sustainability Transition. Previously, he was elected twice as Eurogroup President, initially in 2013 and again in 2015 after being elected by the euro area finance ministers. He is the second person to have held this position since Eurogroup was founded. He was Minister for Finance of the Netherlands until October 2017 and has been Chair of the Board of Governors of the European Stability Mechanism since 2013. Jeroen Dijsselbloem has also served as an advisor to the Dutch Minister for Agriculture, as policy officer for the Dutch Labour Party and on Wageningen Municipal Council. He was a member of the House of Representatives of the Netherlands from 2000 to 2012. He studied business and agricultural economics at Wageningen University.