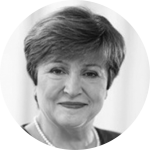 Kristalina Georgieva, Managing Director, International Monetary Fund
Kristalina Georgieva has been Managing Director of the International Monetary Fund since October 2019. She was CEO of the World Bank from 2017 to 2019, during which she also served as Interim President of the World Bank Group for three months. She previously was Vice-President of the European Commission for Budget and Human Resources, working closely on the euro area debt crisis and the refugee crisis. Prior to this position, she was Commissioner for International Cooperation. She worked for 17 years at the World Bank and was appointed Vice-President and Corporate Secretary in 2008. She holds a Ph.D. in Economic Science and a Masters in Political Economy and Sociology from the University of National and World Economy in Sofia, Bulgaria.