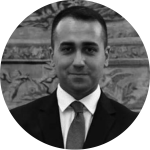 Luigi Di Maio, Minister of Foreign Affairs and International Cooperation, Italy.
Luigi Di Maio is an Italian politician and member of the Five Star Movement. He has been serving as Minister of Foreign Affairs and International Cooperation since September 2019, in the coalition government between the Five Star Movement and the Democratic Party. From 2018 to 2019, he served as Deputy Prime Minister and Minister of Economic Development, Labour and Social Policies. In 2013, he was elected the youngest-ever Vice President of the Chamber of Deputies, a position he held until 2018. While serving in this capacity, he was a member of the 14th Commission on European Union Policies and Chairman of the Supervisory Committee on documentation activities and on the Chamber of Deputies Library.