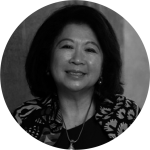 Mari E. Pangestu, Managing Director of Development Policy and Partnerships.
Mari Pangestu was appointed World Bank Managing Director of Development Policy and Partnerships in March 2020. From July onwards, she will also lead and oversee the work programme of the World Bank’s Global Practice Groups. Previously, she served as Indonesia’s Minister of Trade (from 2004 to 2011) and Minister of Tourism and Creative Economy (from 2011 to 2014). She is widely regarded as being an expert on a range of global issues, having worked for over 30 years in academia, second track processes, international organisations and government working areas. Her work has mainly focused on international trade, investment and development in multilateral, regional and national settings. She holds (a Bachelor’s from the Australian National University and) a Ph.D. from the University of California at Davis.