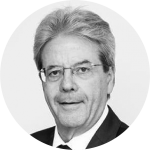 Paolo Gentiloni, Commissioner for Economy, EC.
Paolo Gentiloni has been Commissioner for Economy at the European Commission since 2019, a position he will hold until 2024.
He was Prime Minister of Italy from 2016 to 2018 and a Member of the Chamber of Deputies of the Italian Parliament from 2001 to 2019.
He is a founding member of the Democratic Party in Italy and was elected President of the party in 2019. He has held cabinet positions as Minister of Foreign Affairs and International Cooperation and Minister of Communications. Prior to entering national politics, Paolo Gentiloni was a professional journalist. He holds a degree in Political Science from the La Sapienza University in Rome.