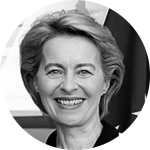 Ursula von der Leyen, President of the European Commission.
Ursula von der Leyen is President of the European Commission and Deputy Leader of the Christian Democratic Union party in Germany. From 2013 to 2019, she was Federal Minister of Defence in Germany and Federal Minister of Labor and Social Affairs between 2009 and 2013. From 2009 to 2019 she was a Member of the German Bundestag, prior to which she served as Federal Minister for Family Affairs, Senior Citizens, Women and Youth. Ursula von der Leyen studied Economics at the London School of Economics and in Göttingen and Münster. She later graduated as a Doctor of Medicine from Hannover Medical School, where she taught at the Department of Epidemiology, Social Medicine and Health System Research and earned a Master of Public Health degree.